Today at the education room we were given an interesting talk about geophysical surveys and pottery.

A number of geophysical surveys of the area have been carried out with many potentially interesting results. Archaeological geophysics (sometimes called geofizz for short) is a non-invasive, non-destructive method of collecting ground based data associated with subsurface features. The final result being a mapped image of the area for interpretation. We were given copies of an image map of survey results for the general Silbury Hill/West Kennet area.

The whole area is covered in intriguing subsurface features relating to differing time periods. Most notable of these are features discovered just south of Silbury Hill. Here, survey results showed the presence of rectangle enclosures and buildings as well as roads, indicative of Romano-British settlement. Roman artefacts had already been found in the immediate area and were the initial pieces of the puzzle. The site is suggestive of a small Romano-British town, which would have overlooked Silbury Hill.

There is also a natural link for the location of the site and the presence of nearby springs. The association of springs and religious worship is well known (for example the Roman Baths) and the presence of the water systems provided such space for ritual practises as well as being crucial for agriculture. This in turn meant this was a rich area for growth & prosperity.

We then had a talk about pottery. A lot of the pottery vessels found at Windmill Hill were Neolithic round based bowls with some having lugs for suspending. It has been discovered that a small proportion of pottery found at Windmill Hill originated all the way from the gabbro outcrop on the Lizard Peninsula, Cornwall. The specific composition of this clay means we can locate it to a small area of the Lizard around St. Kerverne.  This clay, named gabbroic clay, was gathered to make most of the pottery within Cornwall. The clay shows specific inclusion of gabbroic rock such as feldspars, pyroxene minerals called augites and mica. This gives the gabbroic pottery a flecked appearance. This got us all considering how things were moved around during the Neolithic period. Did the clay travel out from Cornwall, or were the pots made in Cornwall first then travelled out on trading routes?

We finished the meeting by writing a personal message on a ribbon to hang from the willow tree at Swallowhead Springs; our next destination.

Our small convey headed down West Kennet Avenue to the roadside car park to walk to the springs. Furnished with cold weather clothing, boots, wellies & ribbons, we set off down the track towards the River Kennet. We crossed the bridge over the chalk stream and took in the surroundings. From here are great views of Silbury Hill and you can also see the top of West Kennet Long Barrow just noticeable on the hill ahead. The long barrow will be next week’s destination. 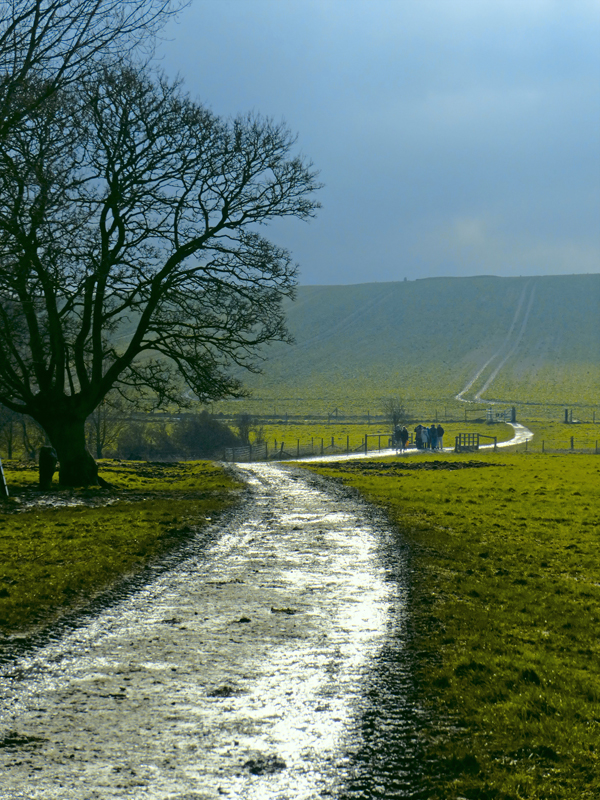 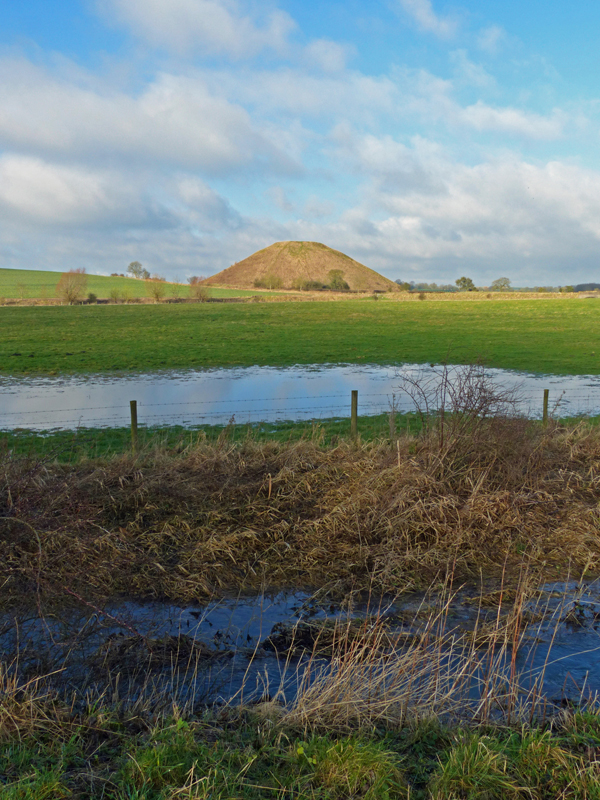 We detoured away from the barrow path, walking alongside the Kennet and past a small copse. On the track was noticed a deer print. Too small to be from a Roe deer it had to be a print of a Muntjack deer. On reaching the field corner we descended down a very muddy and slippery slope. After nearly losing a few fellow companions succumbing to the slopes’ wrath and passing an ill-omened dead bird, we all came out through a multi coloured willow arch, renewed and reborn on secluded sacred ground. 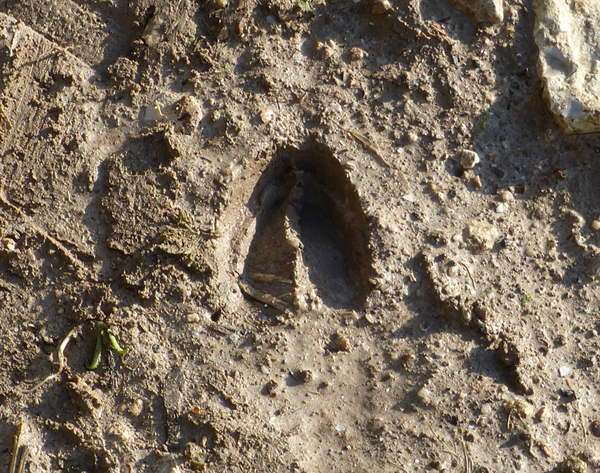 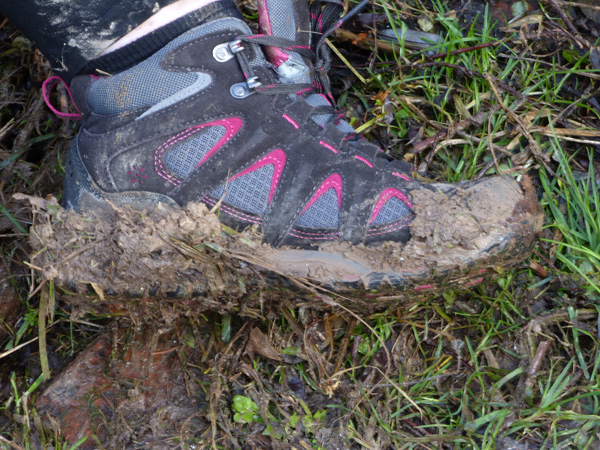 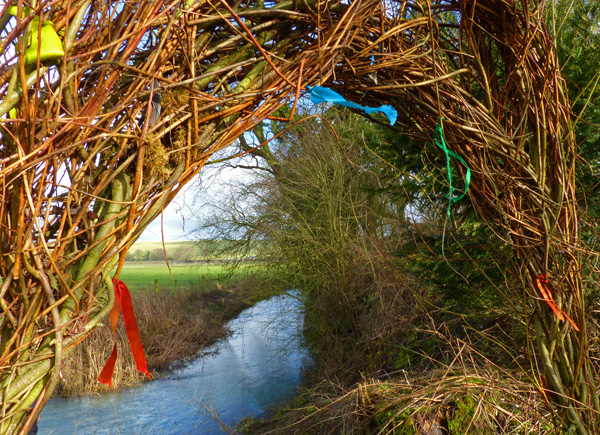 This sacred ground being the location of Swallowhead springs themselves. The site of two natural chalk springs, which at certain times of the year feed the River Kennet. A site revered for its sacredness, many people visit the springs to worship and partake in ceremonial practice with ritual offerings. 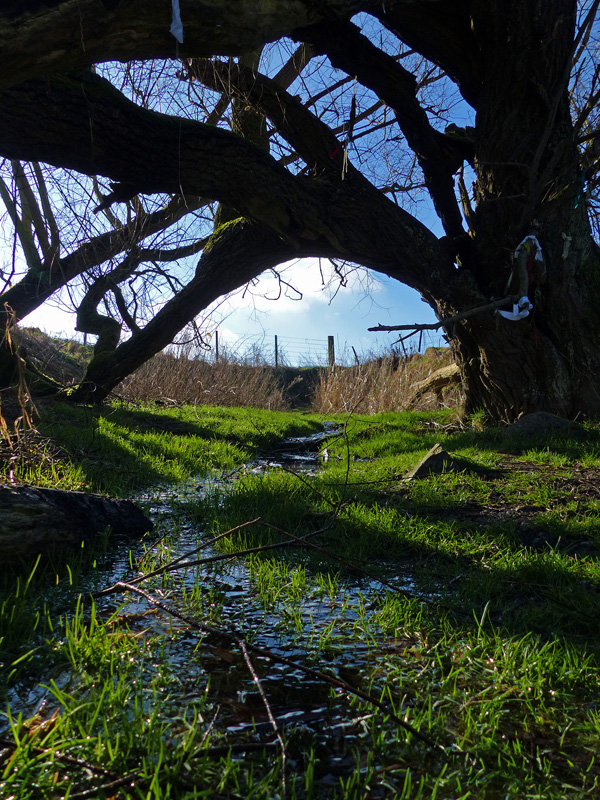 Here, worship of the Celtic goddess Bridget takes place. Bridget is associated with the return of the flow of life-giving waters and the return of spring. The sacredness of the site dates back far into the past, but how far is not certain. More recent lore highlights the importance of the spring’s sacred waters for religious ceremony. It is also interesting to note how over time the site has changed considerably, looking different to how it does for us today.

“The country people have an anniversary meeting on the top of Silbury-hill on every palm-Sunday, when they make merry with cakes, figs, sugar, and water fetch’d from the Swallow-head, or spring of the Kennet. This spring was much more remarkable than at present, gushing out of the earth, in a continued stream. They say it was spoil’d by digging for a fox who earth’d above, in some cranny thereabouts; this disturb’d the sacred nymphs, in a poetical way of speaking.”

Another interesting fact about the site is that the water from the chalk springs can remain a steady 10C all year. Due to this the grasses and other vegetation around the springs often stay lush and green all winter. At the head of the spring lie some stones and on these all types of offering get placed. There were hope stones, crystals, coins, flowers and small wreaths as well as other symbolic offerings. 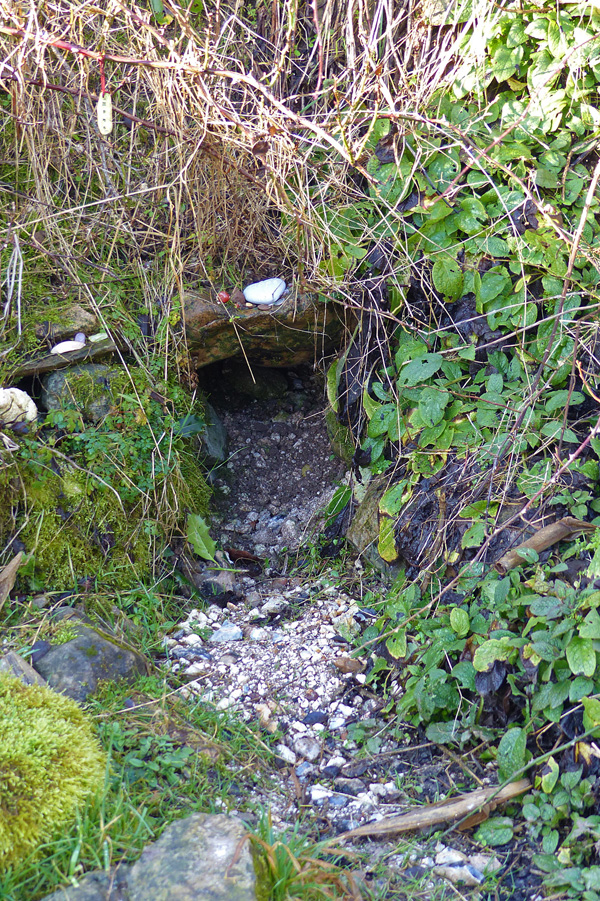 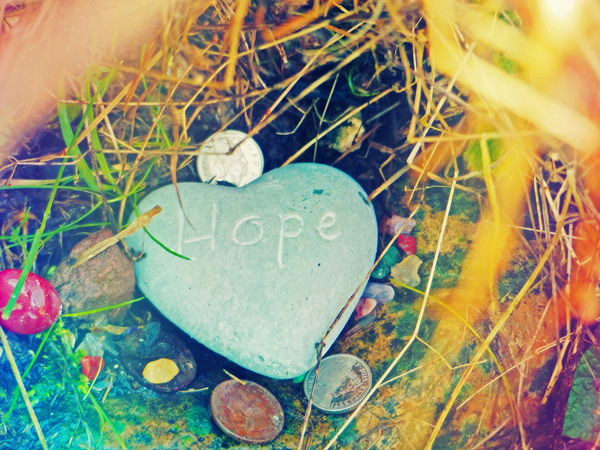 Hanging over the flowing waters from this spring grows a large willow tree. From this tree many personal items hang. We all tied our ribbons, also known as a cloutie, to the great willow as an offering, wish or prayer. We then listened as a prayer was made to the Great Goddess. 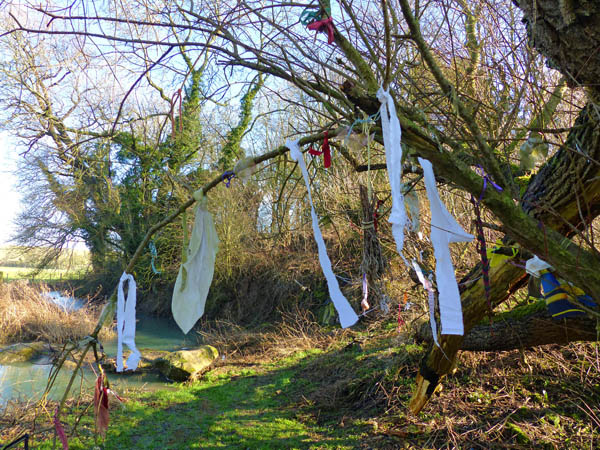 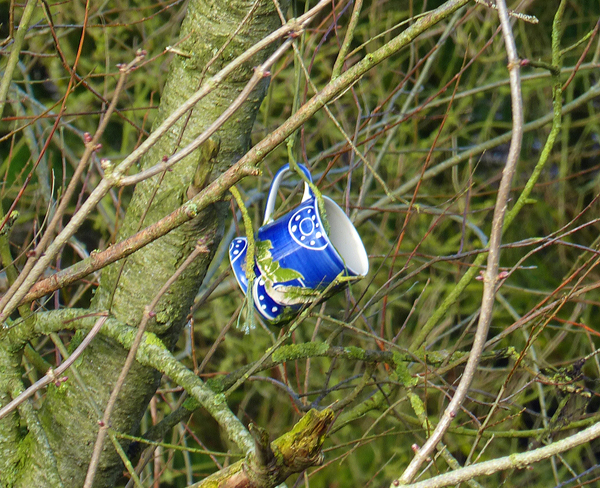 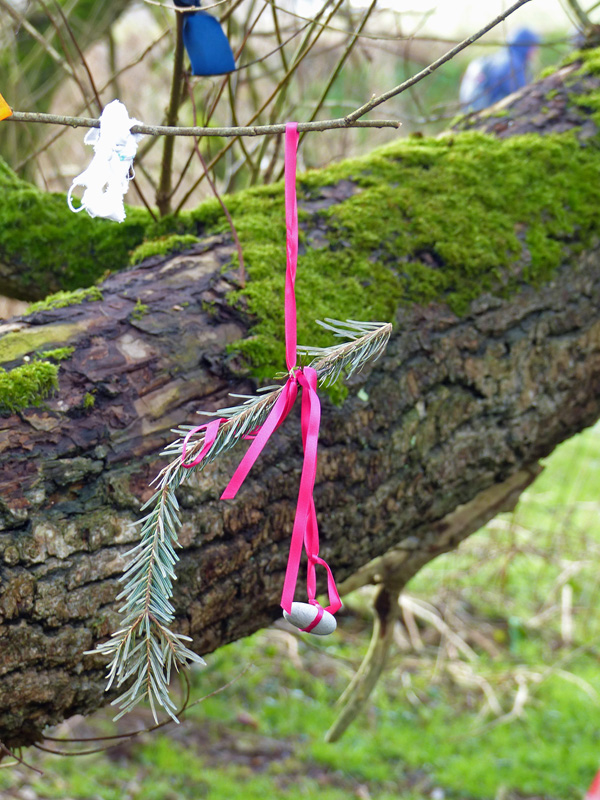 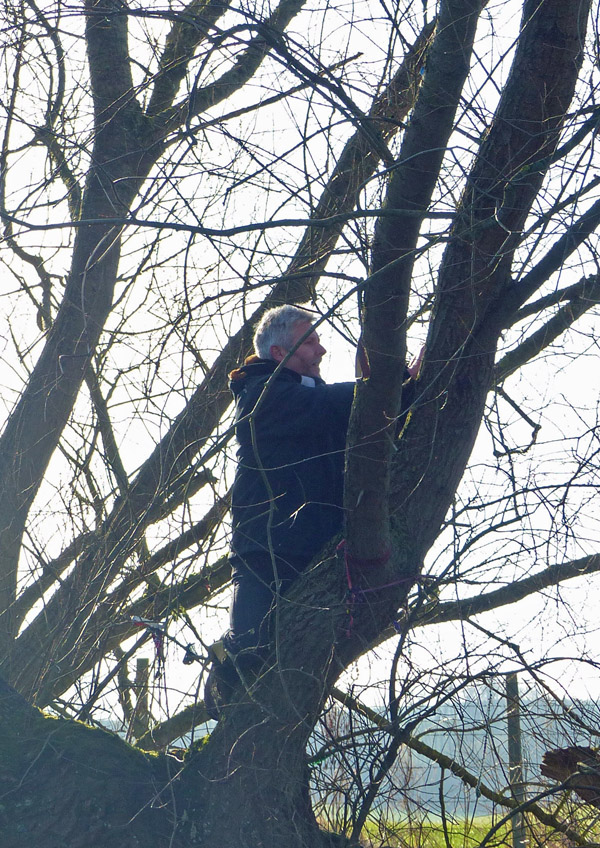 We partook in our own spiritual ceremony in an exercise of standing silent for one minute taking in our surroundings. We also had to guess when exactly we thought the minute was up and to contemplate on time itself. With the birds singing and the trickling of the Kennet in the background, a beautiful song was then sung. The song really made the sacred site come to life, evoking all sorts of emotions and linking the present with the past. We separated, with women on one side and the men on the other, all held hands and sang our own songs in coordinated fashion.  A very uplifting moment.

Across the River Kennet have been placed large crossing stones and this was to be our way back. It was time to sharpen our senses as the crossing was a precarious one with some wobbly moments. With the imaginary soundtrack to Indiana Jones playing in the background, we all made it across the river safely. Admittedly, the water was only knee deep at most but I’m sure I spotted some crocodiles! 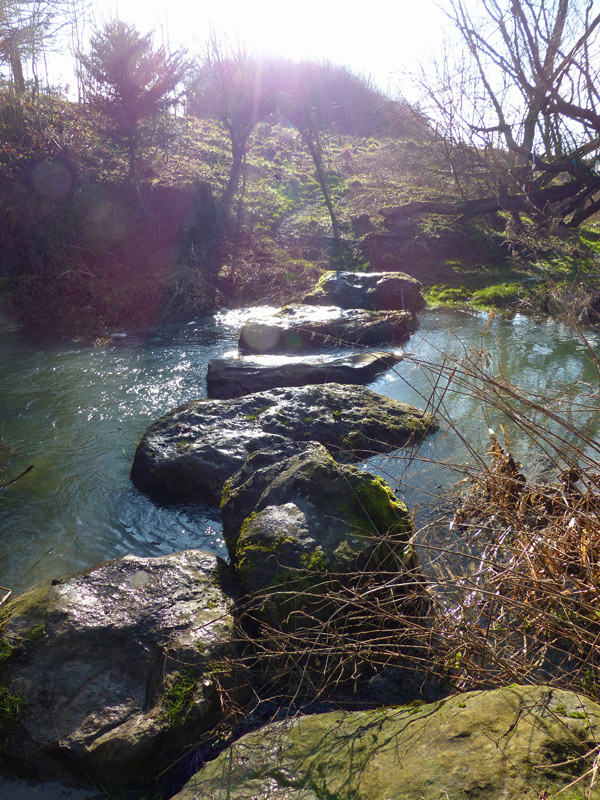 We all walked back to the car park across water meadows and headed back to Avebury education room feeling tired yet revitalised by the cold fresh air.

Another lovely, in depth, educational session.