A lovely start to session 3 with clear blue skies, sunshine and good company.

We all met at the education room for our weekly catch up and chat. We gorged ourselves on
another tempting array of nibbles, which included chocky biscuits & Jaffa cakes. The nibbles were all washed down with hot beverages. After a while we were told two guests were waiting for us at the barrow, so we made our way out to the cars. It was decided that people who didn’t know one another were to go to the barrow together. Along the way the driver and I got chatting and before we knew it, we had ended up going completely the wrong way, being alerted to the fact by a fellow passenger! But not to fear, a quick 360 at the Red Lion pub and we were back on track down a sun filled West Kennet Avenue, happy days.

We again parked at the roadside car park at the base of Waden Hill. It was a bit of a tight squeeze getting us all in, but it all worked out in the end. A sunny stroll by the water meadow took us over the River Kennet and up to the metal gate. The gate being kindly held open by one member for everyone to pass. Our group then walked up the hill path to the barrow, the path having become very muddy by so many visitors. 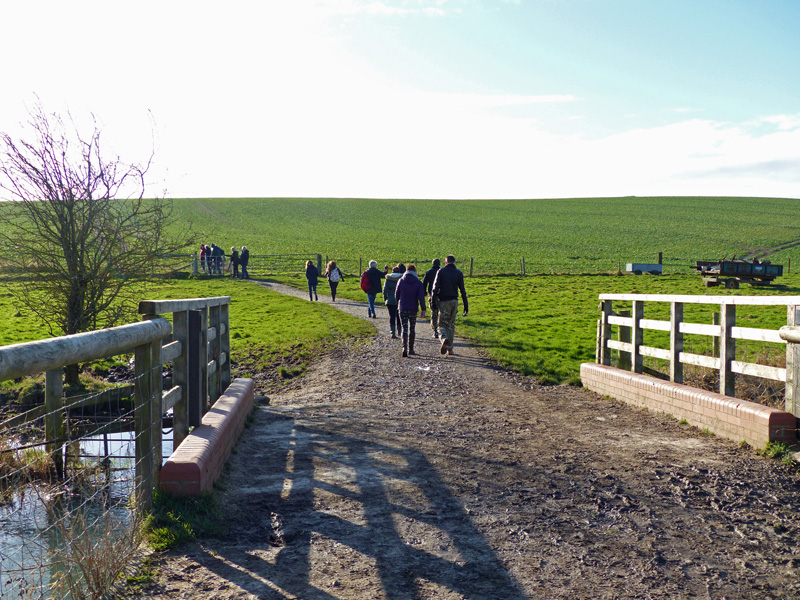 The long barrow was now becoming dominant on the crest of the hill. On approaching the barrow we could hear ethereal tunes riding on the breeze. These tunes were of the flute being played by Maxence des Oiseaux, a French musician, who was standing by a large sarsen stone. The group gathered around to listen to the music and take in the views. 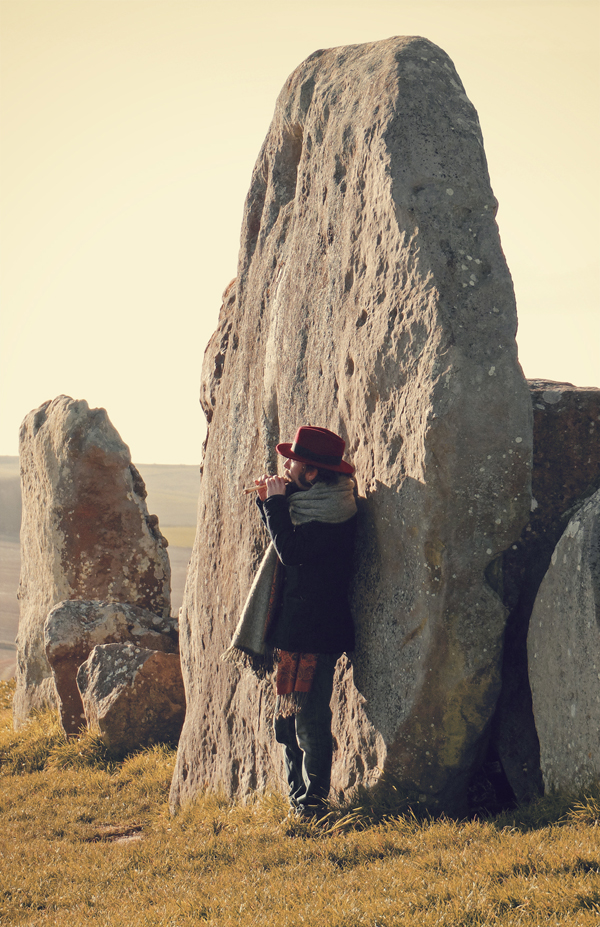 A short while later we were joined by Professor Timothy Darvill who gave a talk on the peoples of the barrow. The individuals discovered in the barrow all died within a short space of time, perhaps over six generations. However, the barrow remained open for ceremonial deposits for over a 1000 years. The long barrow may have been used as a way of marking a family owned territory. A place to celebrate the lineage of the families present. The large size of the barrow making it a prominent and noticeable land marker to other peoples for miles around.

There is evidence of transference of bones from here to local Windmill Hill at certain ceremonial
times of year. One time of year being that which we now celebrate as the pagan Samhain (1 st Nov) or the Roman All Hallows. Said to be the time when the worlds of the living and dead come together. The professor coined a term ‘the night of the living dead’ referring to the barrow as a burial place for the living. The ancestors of the peoples, through ceremony, were seen to be eternal, forever alive. This talk really set the scene for our entrance into the dark unknown chambers of the barrow itself.

The West Kennet Long Barrow was constructed around 3700-3635BC and is 104m long, making it one of the longest barrows in Britain. There are over 1000 barrows that have been discovered in Britain. West Kennet Long Barrow is of a type called the Cotswold-Severn and is similar to others within that area. The mound was formed by the digging out of ditches around the sides. Additional material was brought in from elsewhere. Only around 10% of the length of the barrow was used for burial. The rest of the mound contains a line of sarsen stones, a layer of chalk rubble and earth. The barrow contains 5 burial chambers. The chamber structures is supported by huge sarsen stones in a corbelling fashion and filled in with dry stone walling (oolitic limestone). The limestone was sourced from nearby calne but also near Frome. The chambers were thought to contain at least 46 individuals ranging from 3 – 50 yrs old. West Kennet Long Barrow was restored in 1956 to its present state by archaeologist Stuart Piggott. 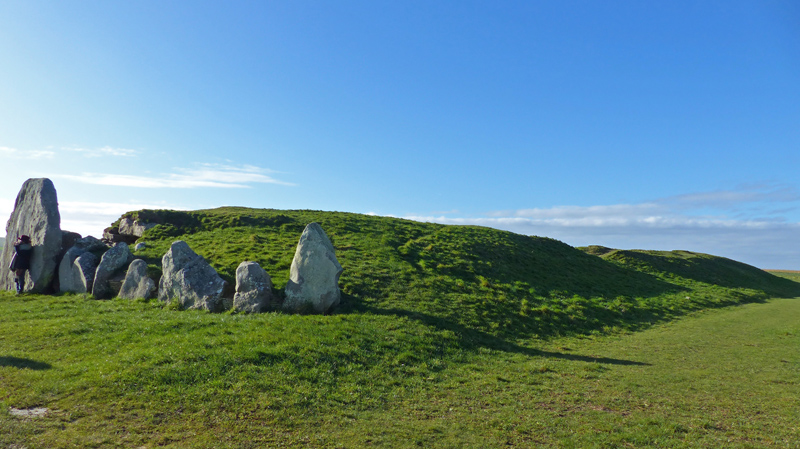 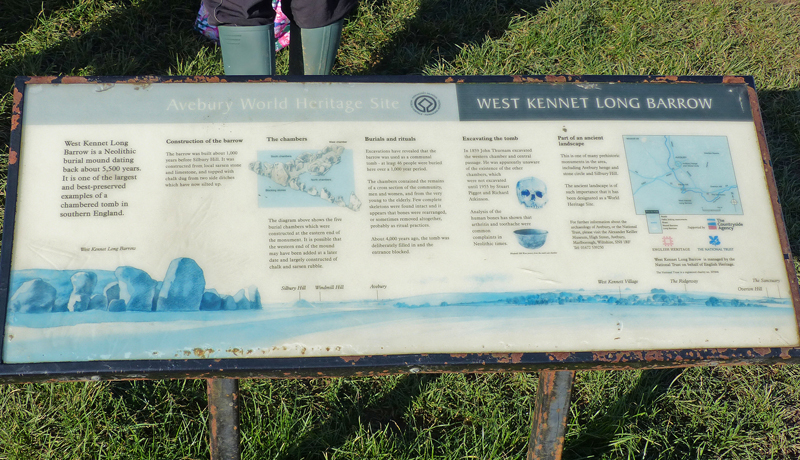 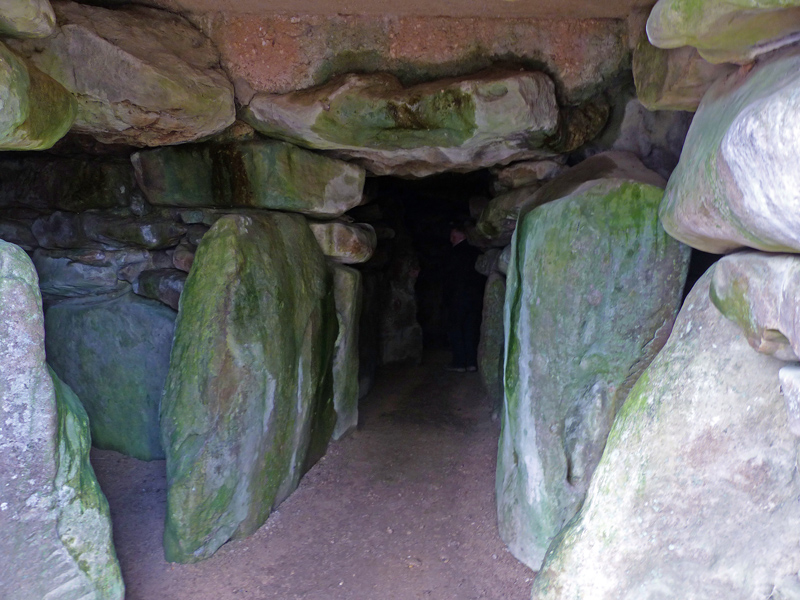 We entered the 9m long central passage of the barrow waiting for our eyes to adjust to the dark
before making our way to the end. A few people were fearing the dark and closed space within. We passed the side chambers and entered the larger western chamber. Here we stood in a circle with Maxence and Professor Darvill in the middle. A few candles had been placed around the chamber giving it an eerie feel. The professor gave a small talk about the barrow and Maxence began playing a tune. Personally, I have been in the barrow many times before but I have never experienced an atmosphere quite like it when the different music was being played. It really did transport you elsewhere and made you contemplate a far off time, surrounded by distant ancestors. It was a special, somewhat meditative moment. The long barrow was being brought back to life!

Maxence first played a ceramic harmonic instrument that had no tuning holes. It played only one tune so the sounds created were made by the player’s mouth. We then listened to a hollowed out bone whistle, similar to one found at a long barrow. This whistle had 5 holes, whereas modern examples typically have six holes. A large horn of antelope was next up, which played a deeper, hollower sound.

We then moved to the forecourt of the barrow to hear some more instruments being played. Shown next was a llama bone flute, a traditional instrument from Peru. The flute has 4 holes and is embossed with precious stones and topped with a carved jaguar head motif. Other instruments included a swan bone flute & longer antelope horn. 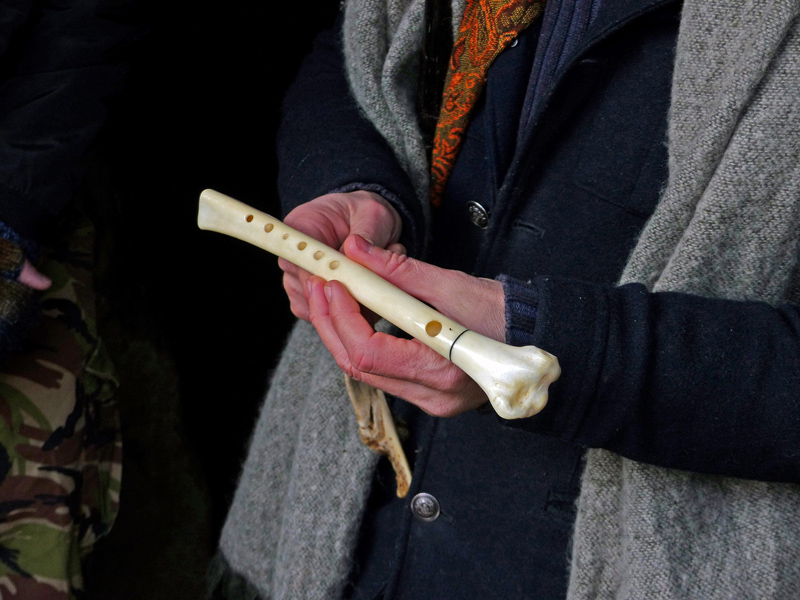 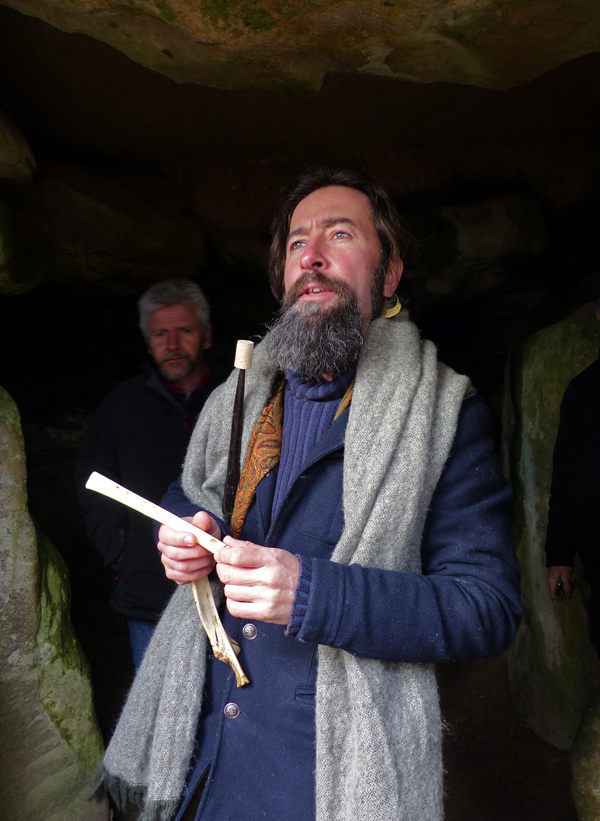 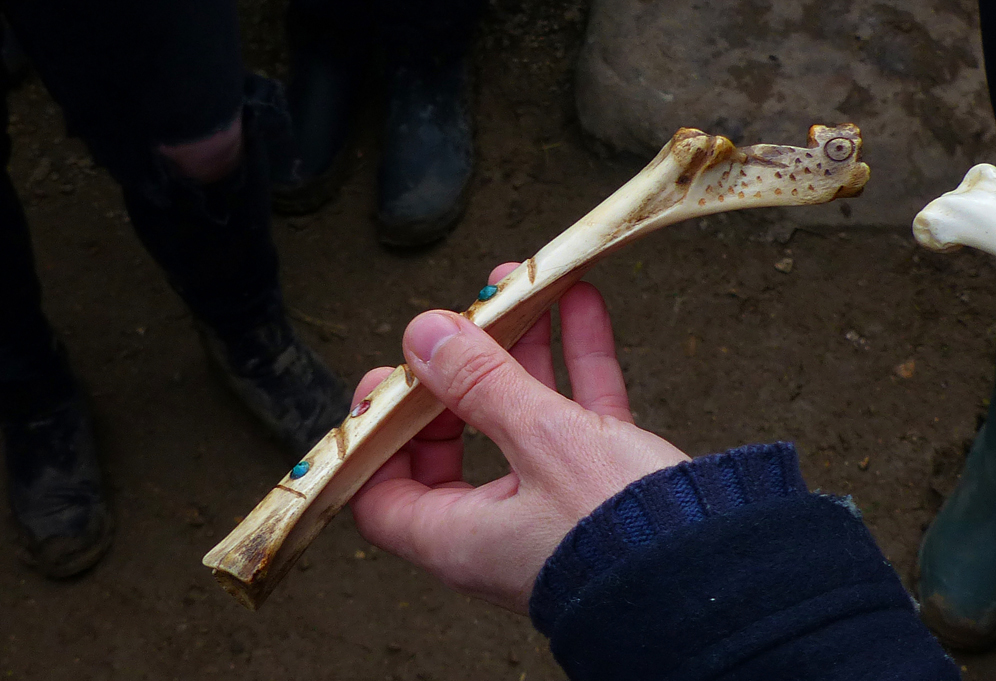 Emerging out of the barrow and back into the world of the living, we were greeted by sunlight and the song of skylarks. We all got into a line for a group photo along the stone façade and then preceded to sing the Human Henge classic, “piggy pig, dog dog”. We followed some steps up to the top of the barrow mound and walked its length. From here great views were had. We came around the flank of the barrow chatting as we walked. One group member noted how the meeting of people on this project really brings her out of herself. It is a way of escaping other things going on. 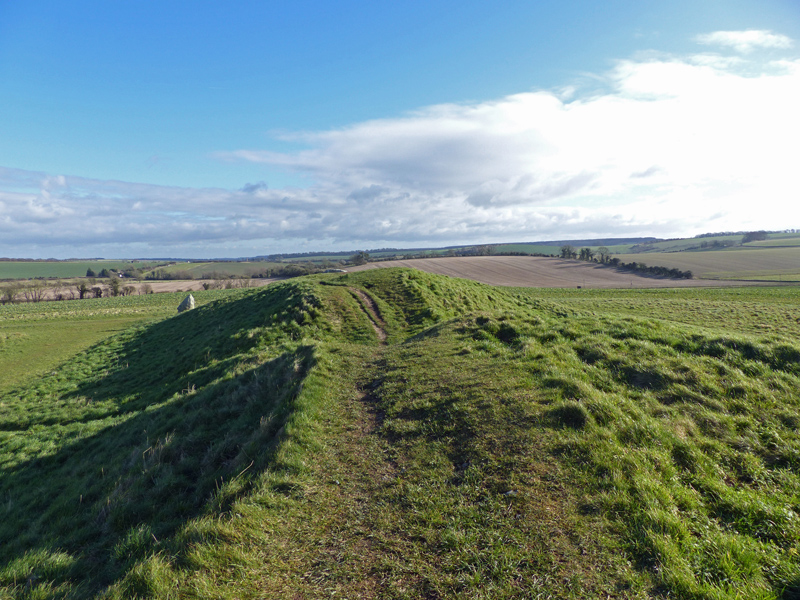 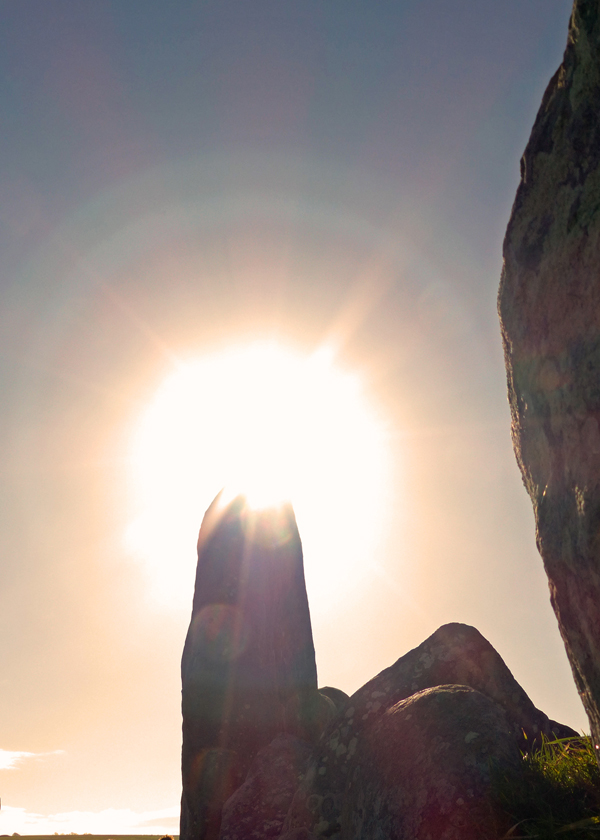 We all walked back the way we came to the parked cars, chatting as we went.

The day’s session ended back at the education room where we were treated to more of Maxence’s unique music. Thanks to a member of the group being fluent in French we were able to fully understand Maxence’s crafted instruments and passion for music. With music of a
medieval/renaissance style we were played out with a flute made from an elder tree and a large
antelope horn to finish. 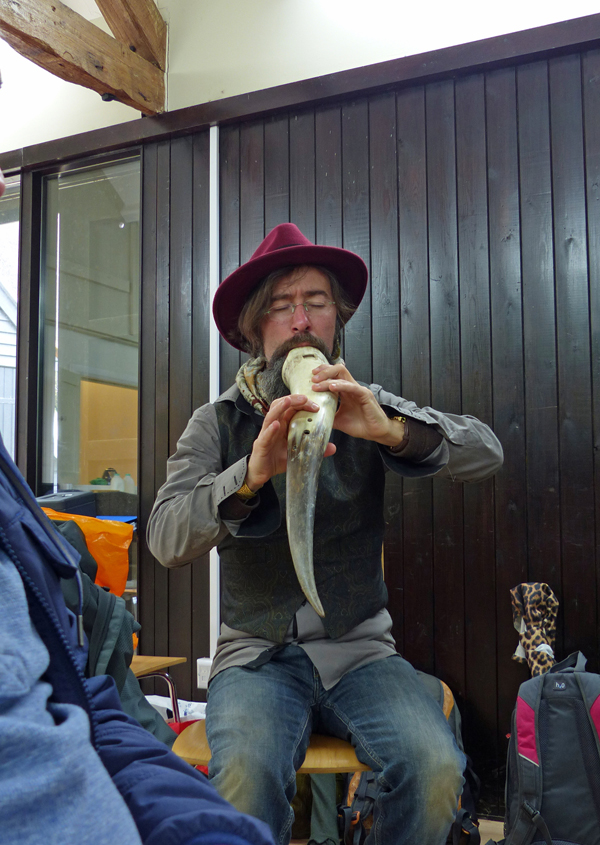 What a lovely day! 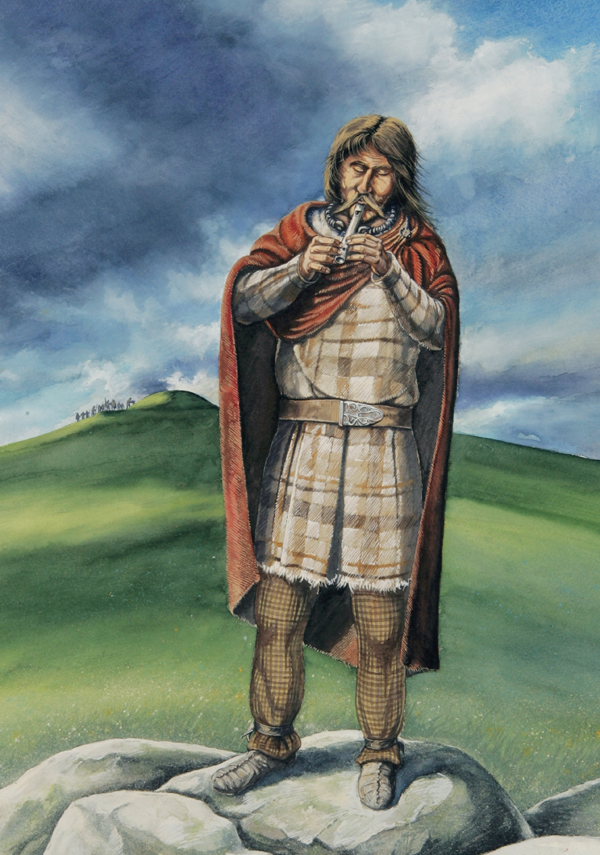 ‘One of the secondary burials in the Seaty Hill Bronze Age Barrow on Malham Moor contained Iron and the pipe. This may be one of Max’s  musical ancestors and he invoked the sounds of that time and many other periods. I imagined the piper living on in the beautiful Dales landscape through his music as his body was interred in the barrow.’
Peter Dunn