Awaiting us this morning as we all converged in the Ed room was another nice healthy buffet (courtesy of the lovely Yvette). This week’s featured fruit was the juicy Blood Orange. After everyone had arrived we settled down to some pre-outing talks.

Today we talked about aspects of archaeology.  We discussed tangible cultural heritage, for example things that can be touched.  We moved on to talking about intangible heritage i.e. songs, beliefs. Knowledge/knowhow, communications (language, instruments, visual, signs), myths, legends and folklore. Within the discussion, Yvette mentioned to a very interesting example of a language form. This was the whistling language called Silbo gomera, of La Gomera, Canary Islands. Well worth a look. We finished in the ed room hearing of archaeology as an ever evolving entity, all thanks to novel thinking and advances in transferable science and technology.

As in previous weeks, I again car shared with different members of the group. As we were setting off, I was asked if I would listen to music created, sung and played by one group member. I have to thank the person now, for what was a really emotionally moving journey. On arriving at Overton Hill/Ridgeway car park, I listened to a second song, this one taking me off into the distance with tears in my eyes. Thank you to this person for feeling you could share these personal lyrics with me! I will never forget that.

From the car park we headed for the road. We were somewhat behind the rest of the group at this point when, coincidently, and relating to the earlier talk about intangibles, there appeared to be some Gomeran sightseers, trying to communicate and sign with us?  To the sound of whistles, I crossed the very precarious part of the A4, to reach the sanctuary of the Sanctuary.

We all gathered around a very knowledgeable Briony, who brimmed with passion for her subject and filled us with understanding of where we stood.  I walked around the Sanctuary trying to imagine what it once may have looked like and tried to understand the reason/s for its use & position on this hillside. Very compelling. 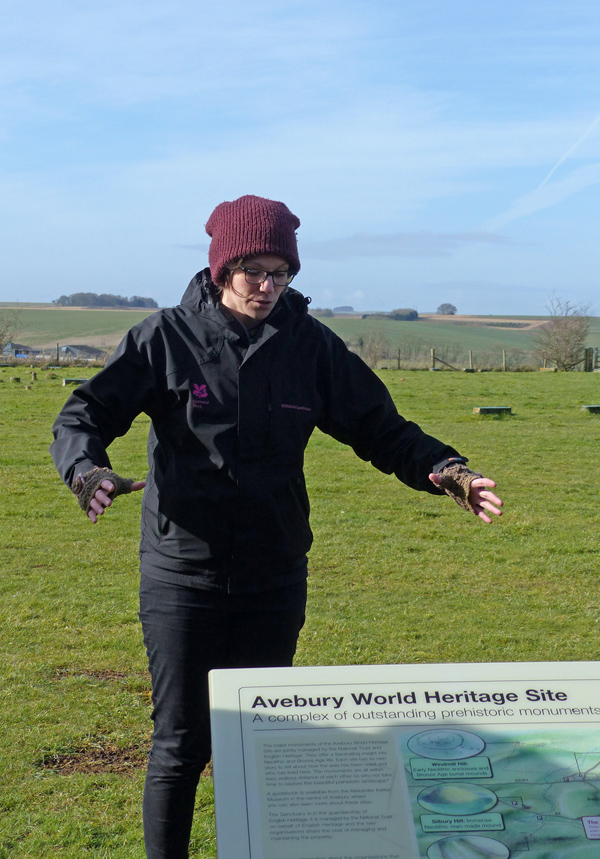 The sanctuary site once stood as a concentric ring of wood and stone, built in phases of wooden posts possibly then moving on to stone circles. The posts have long since disappeared and according to William Stukeley, the remaining stones were removed from the site between 1723-24AD. One theory, mentioned by volunteer Steve, suggests the removed stones were used to help build a farmhouse and wall within West Kennet. Today contemporary concrete blocks mark the sites of wooden poles and also of the stone holes. The site joined to the Avebury Henge by the processional way of the West Kennet Avenue. The entrance is to the west of the outer circle and consists of three larger stones. The exact purpose of the Sanctuary is uncertain, with many theories being passed around. I will leave the interpretation up to yourselves. 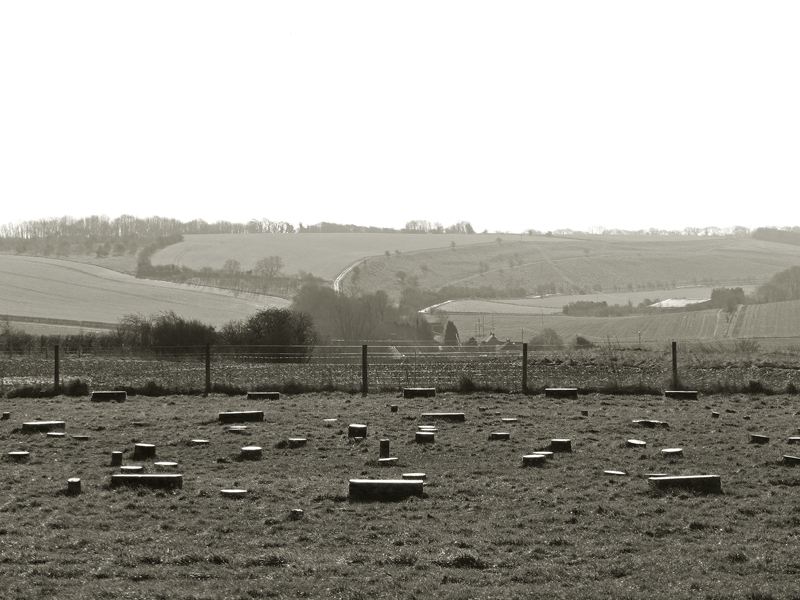 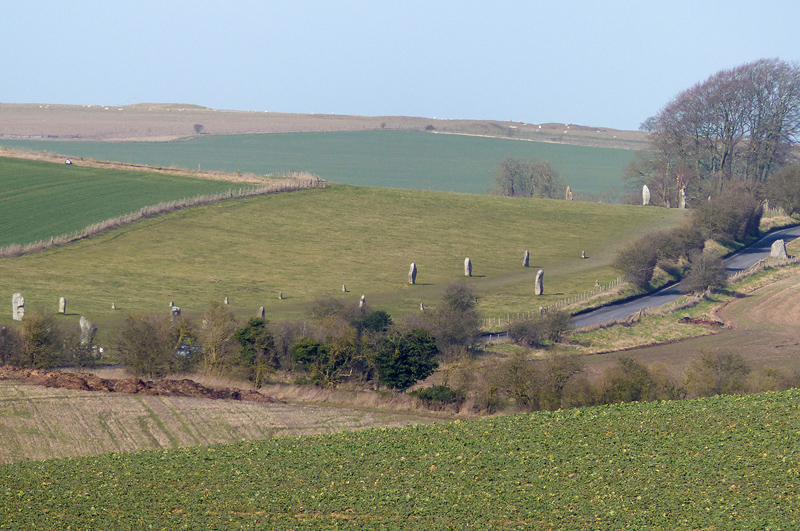 There are some great panoramas of the surrounding area to be had from this location. Looking down the eastern slope, I pictured an avenue of stones adjoining the remains of the existing avenue and tried to position myself, walking side by side, with the peoples of those times. I tried to imagine what it may have been like. I looked up and took a picture of this Yellowhammer, a bird that most likely was observed by these peoples as they walked this hill top long ago. 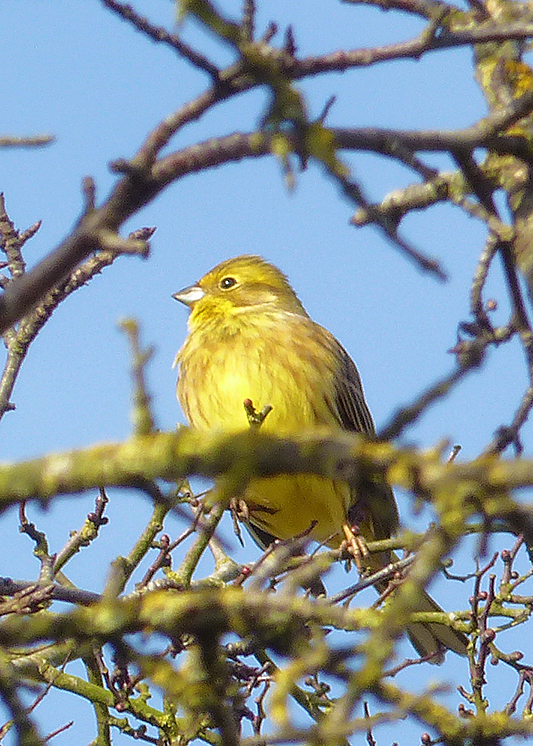 Crossing back over the A4 with our life in our own hands dodging roman chariots (me and my imagination!) we visited the Bronze Age barrow cemetery known as Seven Barrows.  The name derives from the Anglo-Saxon ‘Seorfon Beorgas’ (In actuality, the site really consists of twelve round barrows). Ten of the twelve barrows are situated on the north side of the A4, the other two being to the south of the road. We had visited these last two barrows first. I became aware of the bowl barrow south of the Sanctuary. This barrow had been flattened much by agriculture but originally had a diameter of 40m and a height of 3m. The barrow contained no evidence of a ditch or remains. (see pic below). Adjacent to the Sanctuary lies a bowl barrow, this example was originally surrounded by a ditch feature. The barrow contained an inhumation burial, a dagger and axe, a pin and a tree trunk coffin – that is, I’ve read. We didn’t actually excavate it ourselves! …wasn’t time. 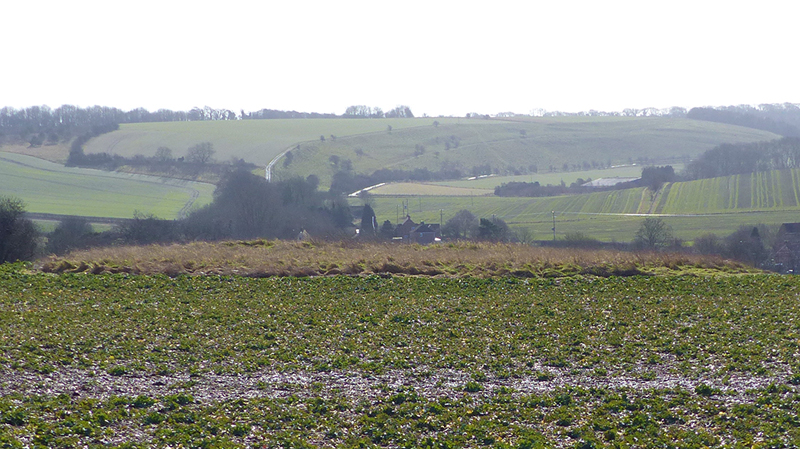 The prominent mounds to the north of the road consist of the five barrows, four are examples of bell barrows, with a smaller fifth bowl barrow in between. All of these barrows contained cremation remains. The general construction of these barrows consisted of building material up and around bodies/remains within. The barrows had secondary use by peoples of other periods spanning hundreds of years. Often, later surface burials or burials nearby were created. 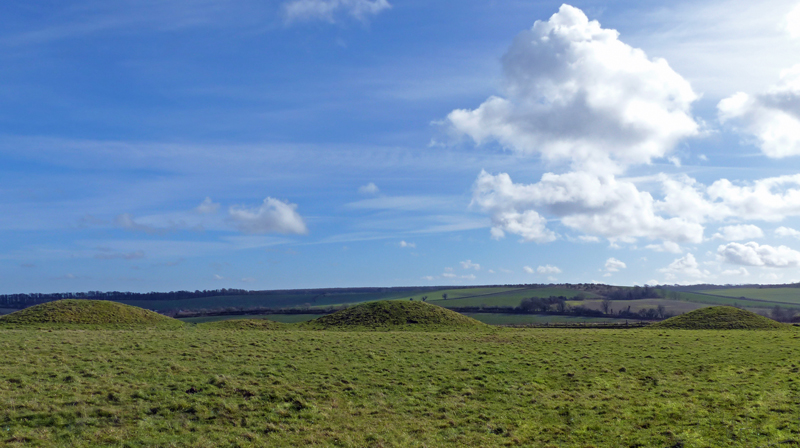 Briony also showed us the site of the old roman road and some special burial mounds. These included a Bronze Age bowl barrow, a Saxon/pagan inhumation cemetery and lastly, three unique Roman burial mounds. This portion of the site consists of a rare mix of burial mounds from a mix of differing time periods. The older Neolithic Bronze Age bowl barrow, is of a rarer form reminiscent of Beaker period styles seen in Wales. The three Roman burial mounds positioned next to the roman road, are said to be a very unique occurrence to Britain. Were these romans inspired to take on local customs? Briony then showed how these roman barrows were encircled with post holes creating a fence. They contained cremation pits and burial remains. The Anglo Saxon secondary editions to the site contained weapons and remains. In the opposite direction across a field, beech covered Bronze Age round barrows were seen. The one photographed below being an example of a well preserved bell barrow. 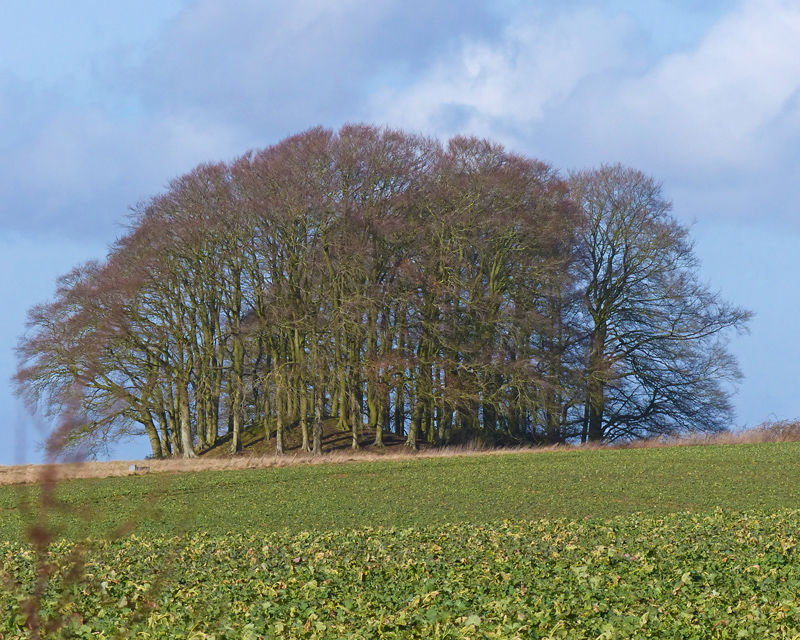 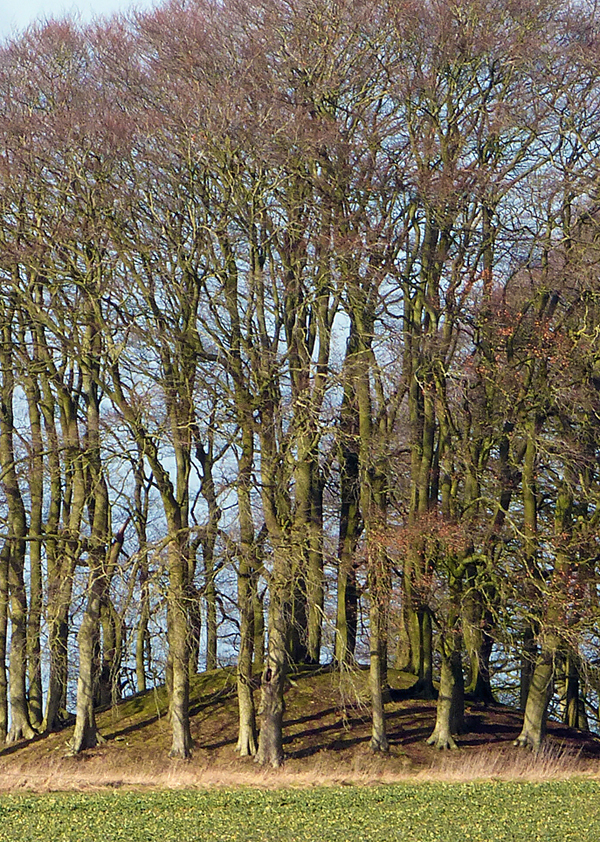 It was then everyone’s favourite sing along time. There were no skylarks present this week, I guess the larks knew they couldn’t compete with us! We all sang a live rendition of ‘living bell’ courtesy of Yvette, with some fun and games mixed in courtesy of Danny. 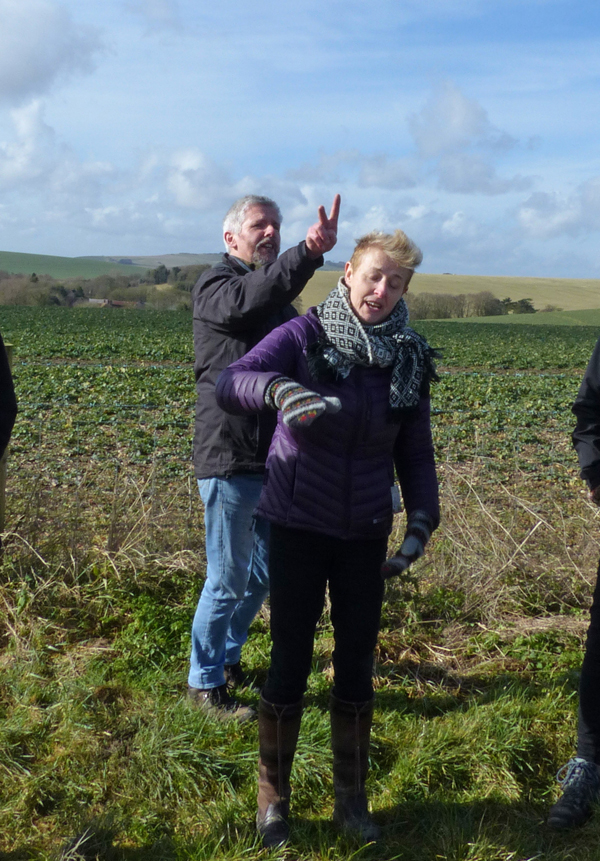 Afterword’s, I took some time out to breathe in my surroundings. I noted the barrows studding the landscape with a soft, non-angular, lush green undulating flow, highlighted by a bright blue winter skyscape, just lovely.  I must come back and take photos under different settings.

We walked back along the Ridgeway to the car park chatting. There is a nice familiarity growing within the group as we get to know each other.  I got stopped and had a chat with an interesting local man who was living in a large truck. He knew a lot about the local sites and mentioned his adventures with a metal detector, he had yet to find that elusive roman gold hoard! We all drove back to the ed room to have lunch and conclude this week’s session. 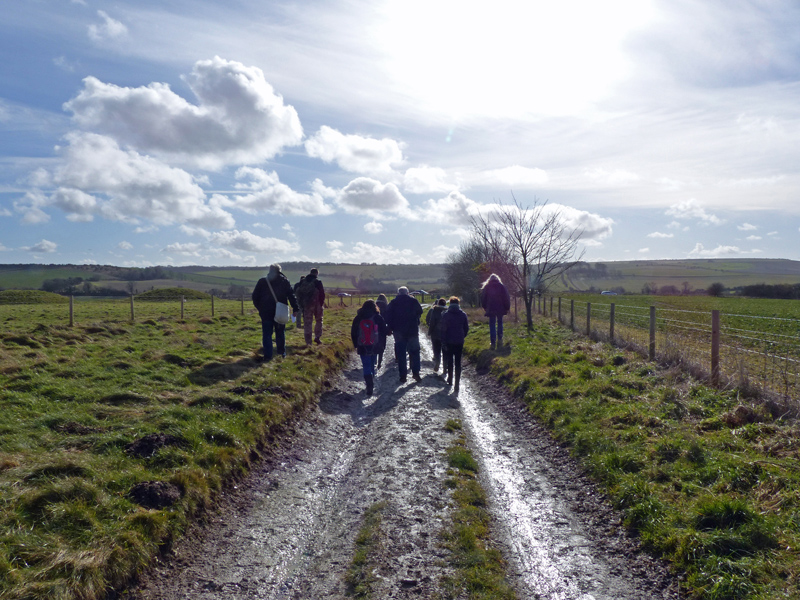